The Riddle of Sweden's COVID-19 Numbers

What exactly has Sweden done (and not done) in response to COVID-19?

How has it worked? Well, Sweden is roughly at the same level as other western European countries in terms of per capita mortality, but it's also doing much worse than its Nordic neighbors. Early apocalyptic predictions have not materialized. Economically it doesn't seem to have gained much, as its Q2 GDP drop was more or less the same as that of Norway and Denmark.1

Sweden has followed a trajectory similar to other Western countries with the first wave in April, a pause during the summer (Sweden took longer to settle down, however), and now a second wave in autumn.2 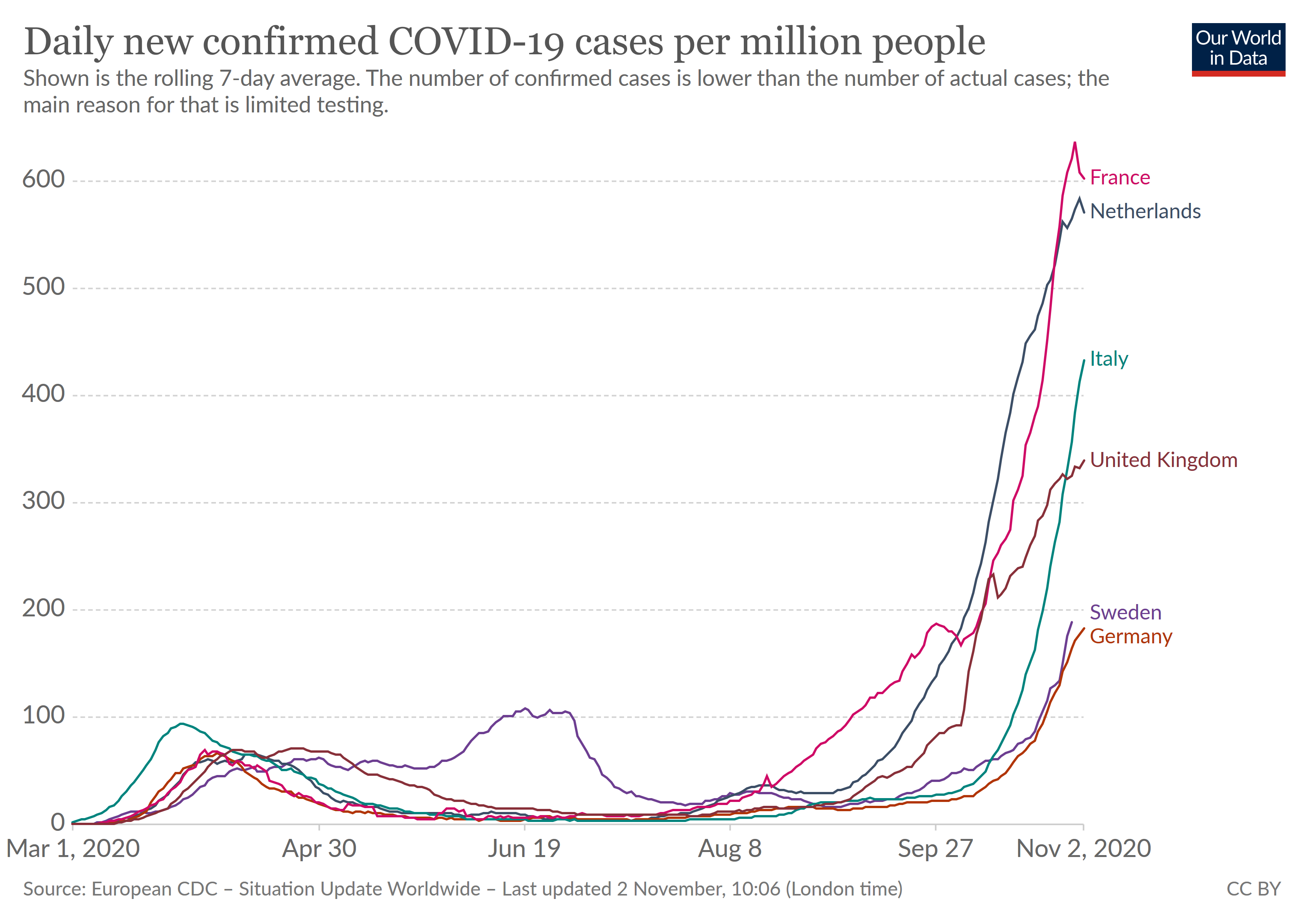 The fact that the summer drop-off in cases happened in Sweden without lockdowns and without masks suggests that perhaps those were not the determining factors? It doesn't necessarily mean that lockdowns are ineffective in general, just that in this particular case the no-lockdown counterfactual probably looks similar.

The similarity of the trajectories plus the timing points to a common factor: climate.

This sure looks like a seasonal pattern, right? And there are good a priori reasons to think COVID-19 will be slow to spread in summer: the majority of respiratory diseases all but disappear during the warmer months. This chart from Li, Wang & Nair (2020) shows the monthly activity of various viruses sorted by latitude: 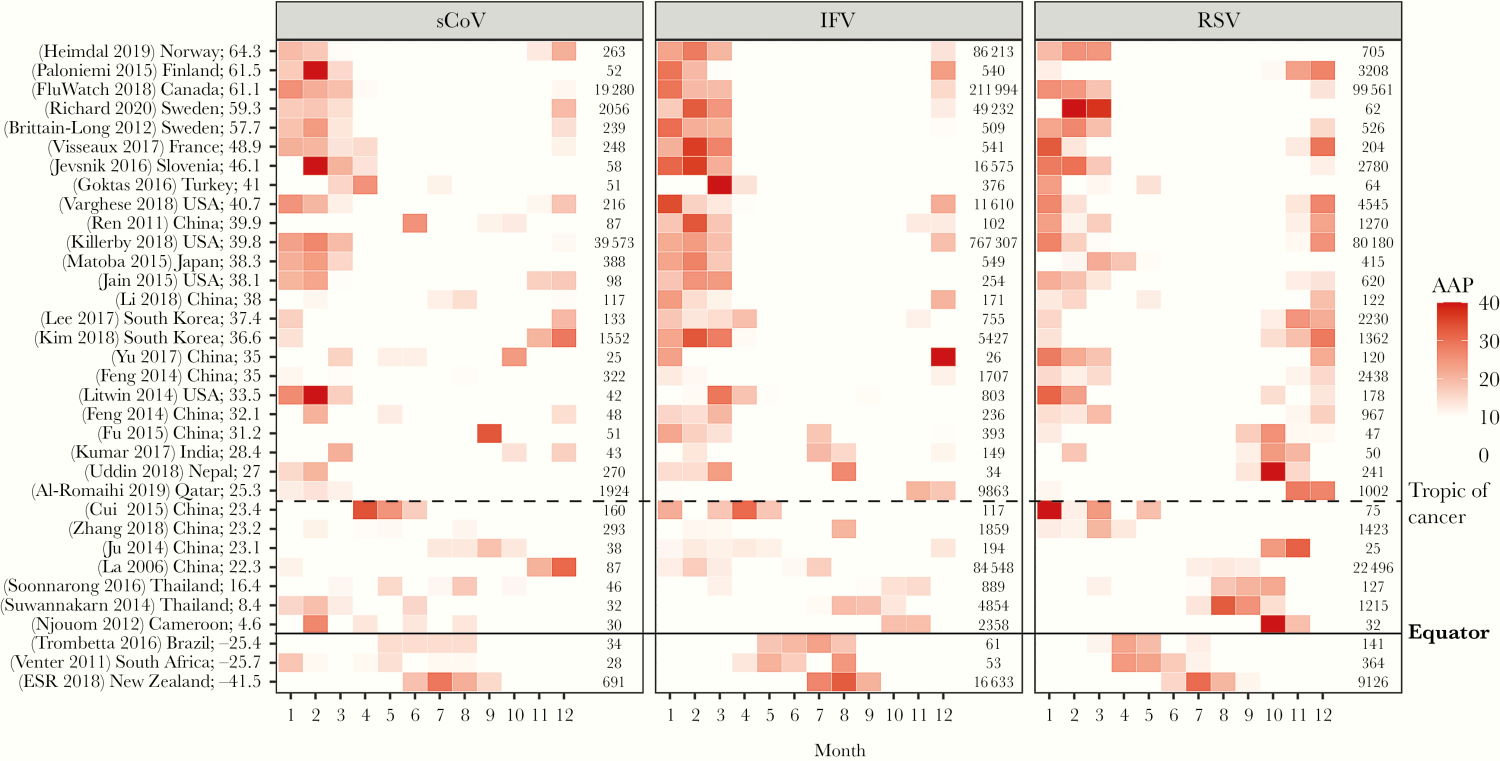 The exact reasons are unclear, but it's probably a mix of temperature, humidity,3 behavioral factors, UV radiation, and possibly vitamin D.

However, when it comes to COVID-19 specifically there are reasons to be skeptical. The US did not have a strong seasonal pattern: 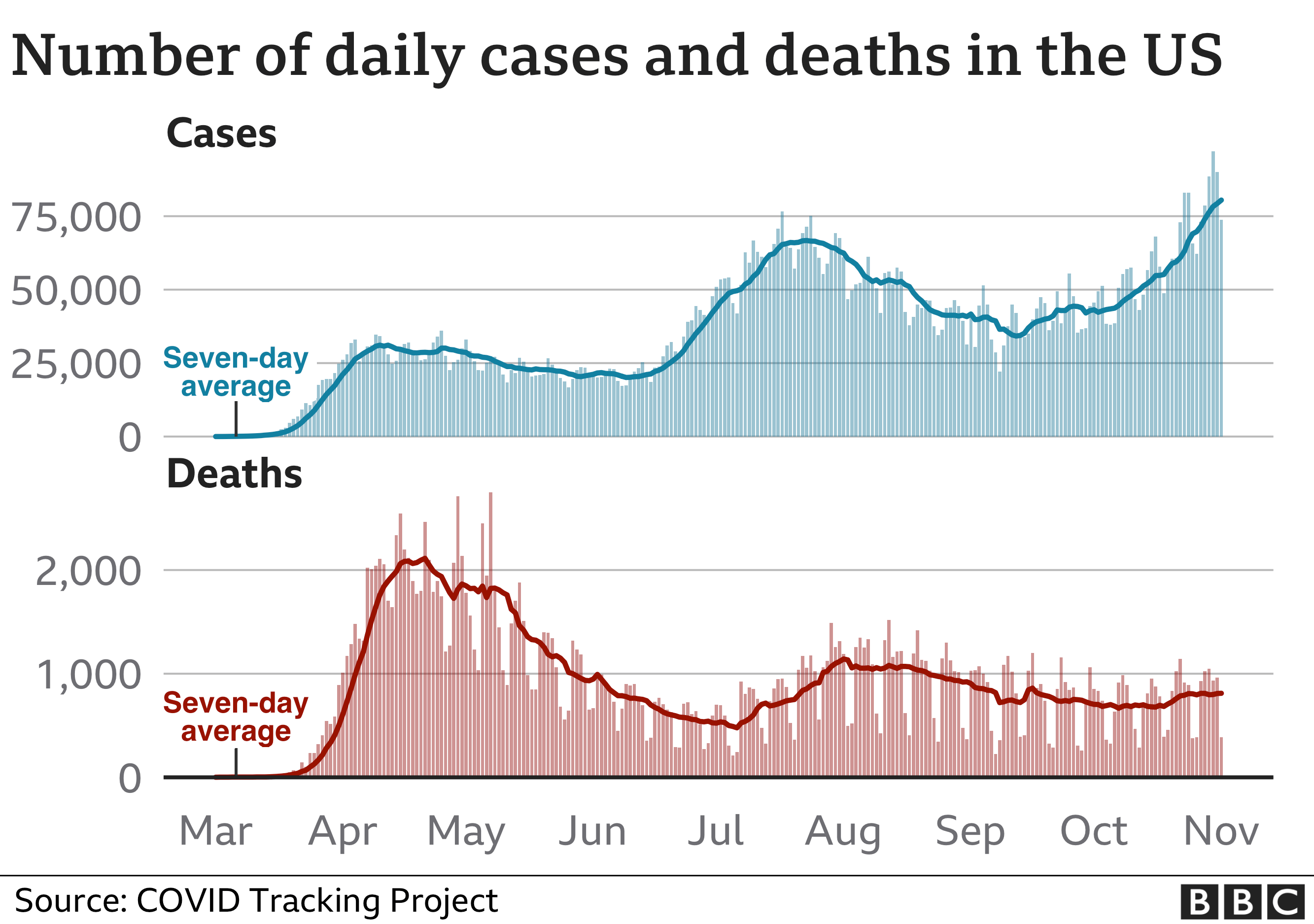 And in the southern hemisphere, Australia's two waves don't really fit a clear seasonal pattern. [Edit: or perhaps it does fit? Their second wave was the winter wave; climate differences and lockdowns could explain the differences from the European pattern?] 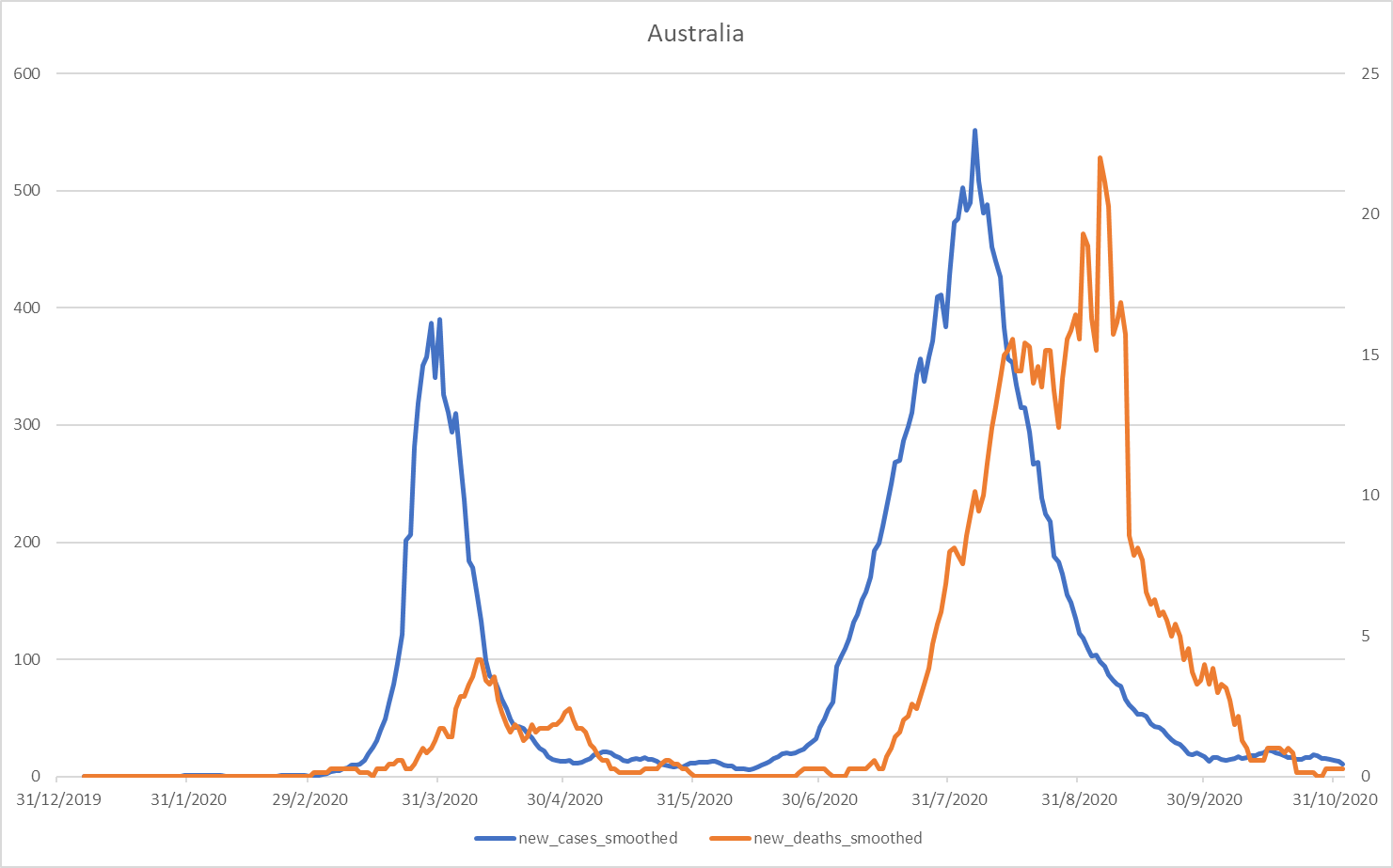 The WHO (yes, yes, I know) says it's all one big wave and covid-19 has no seasonal pattern like influenza. A report from the National Academy of Sciences is also very skeptical about seasonality, making comparisons to SARS and MERS which do not exhibit seasonal patterns.

A review of 122 papers on the seasonality of COVID-19 is mostly inconclusive, citing lack of data and problems with confounding from control measures, social, economic, and cultural conditions. The results in the papers themselves "offer mixed offer mixed statistical support (none, weak, or strong relationships) for the influence of environmental drivers." Overall I don't think there's compelling evidence in favor of climatic variables explaining a large percentage of variation in COVID-19 deaths. So if we can't attribute the summer "pause" and autumn "second wave" in Europe to seasonality, what is the underlying cause?

If not the climate, then I would suggest schools, but the evidence suggests they play a very small role. I like this study from Germany which uses variation in the timing of summer breaks across states, finding no evidence for an effect on new cases. This paper utilizes the partial school closures in Sweden and finds open schools had only "minor consequences". Looking at school closures during the SARS epidemic the results are similar. The ECDC is not particularly worried about schools, arguing that outbreaks in educational facilities are "exceptional events" that are "limited in number and size".

So what are we left with? Confusion.

This chart shows daily new cases and new deaths for all of Europe: 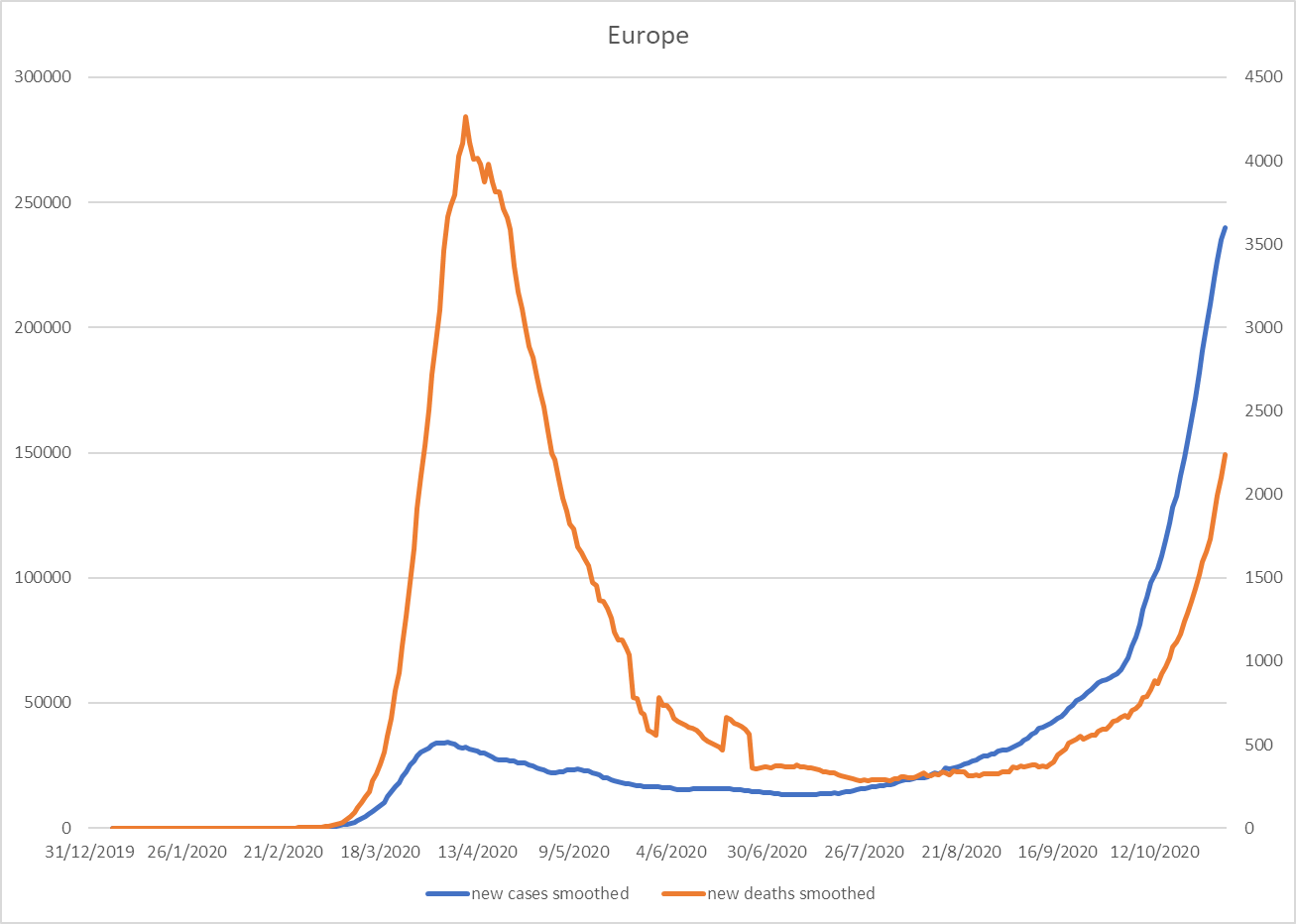 There's a clear relationship between cases & deaths, with a lag of a few weeks as you would expect (and a change in magnitude due to increased testing and decreasing mortality rates). Here's what Sweden's chart looks like: 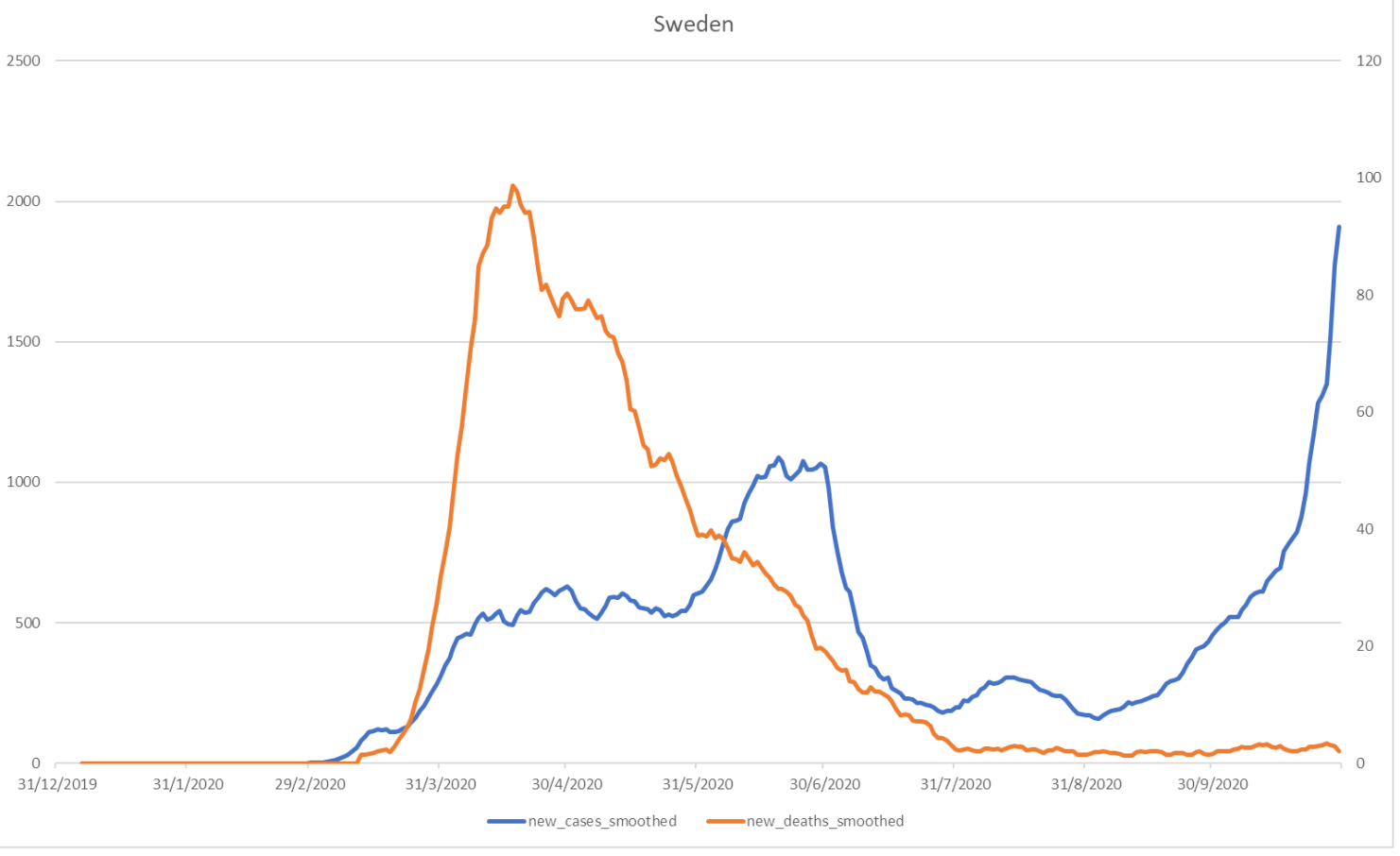 What is going on here? Fatality rates have been dropping everywhere, but cases and deaths appear to be completely disconnected in Sweden. Even the first death peak doesn't coincide with the first case peak, but that's probably because of early spread in nursing homes.

Are they undercounting deaths? I don't think so, total deaths seem to be below normal levels (data from euromomo):

So how do we explain the lack of deaths in Sweden?

Could it be that only young people are catching it in Sweden? I haven't found any up to date, day-by-day breakdowns by age, but comparing broad statistics for Sweden and Europe as a whole, they look fairly similar. Even if age could explain it, why would that be the case in Sweden and not in other countries? Why aren't the young people transmitting it to vulnerable old people? Perhaps it's happening and the lag is long enough that it's just not reflected in the data yet?

[Edit: thanks to commenter Frank Suozzo for pointing out that cases are concentrated in lower ages. I have found data from July 31 on the internet archive; comparing it to the latest figures, it appears that old people have managed to avoid getting covid in Sweden! Here's the chart showing total case counts:]

Mortality has declined everywhere, and part of that is probably down to improved treatment. But I don't see Sweden doing anything unique which could explain the wild discrepancy.