1. New Science is an attempt to construct a brand new, parallel research ecosystem without all the cruft of academia. Founded by Alexey Guzey and advised (among others) by Tyler Cowen and Andrew Gelman.

2. Observing Many Researchers Using the Same Data and Hypothesis Reveals a Hidden Universe of Uncertainty: 73 teams study the same hypothesis with the same data. Chaos ensues. "Each model deployed to test the hypothesis was unique".

3. Tal Yarkoni and Joe Hilgard have exited academia. Some notes on The Science Reform Brain Drain. "I didn’t believe then that scientific reform would just fizzle out, given the attention and passion it elicited. Now, seeing how tenure insulates older researchers and competition weeds out those who don’t play by their rules, I understand the cynicism better."

4. Please Commit More Blatant Academic Fraud "The problem with this sort of low-key fraud is that it’s insidious, it’s subtle. In many ways, a fraudulent action is indistinguishable from a simple mistake. There is plausible deniability [...] Let’s make explicit academic fraud commonplace enough to cast doubt into the minds of every scientist reading an AI paper. Overall, science will benefit."

5. Nonreplicable publications are cited more than replicable ones.

6. Atoms: smart contracts for science funding. "Implicit researcher duties are now made explicit with incentives. As a result, scientific roles can become both more specialized and more diverse. PIs can focus less time on writing grants and more time on conducting research. Or the PIs who enjoy and excel at raising funds can do so and even re-deploy it to the right scientists, akin to founders who become angel investors and venture capitalists."

7. Understanding and Predicting Retractions of Published Work Based on metadata + full text. Performs surprisingly well. "Individually, SJR, abstract, country give the best performance out of all metadata features."

8. Collison, Cowen & Hsu, What We Learned Doing Fast Grants. "64% of respondents told us that the work in question wouldn’t have happened without receiving a Fast Grant."

10. A Retrospective on the 2014 NeurIPS Experiment: a giant post on the consistency of the review process, based on 170 papers submitted to NeurIPS. The consistency is actually fairly high, though there is "no correlation between reviewer quality scores and paper's eventual impact".

11. On the role of scientific journals in shaping the narrative around the origins of covid.

Yet this is the same prestigious journal that published a now infamous statement early last year attacking “conspiracy theories suggesting that Covid-19 does not have a natural origin“. Clearly, this was designed to stifle debate. It was signed by 27 experts but later turned out to have been covertly drafted by Peter Daszak, the British scientist with extensive ties to Wuhan Institute of Virology. To make matters worse, The Lancet then set up a commission on the origins — and incredibly, picked Daszak to chair its 12-person task force, joined by five others who signed that statement dismissing ideas the virus was not a natural occurrence.

There was a market on how many times Souljaboy would tweet during a given week. The way these markets are set up, they subtract the total number of tweets on the account at the beginning and end, so deletions can remove tweets. Someone went on his twitch stream, tipped a couple hundred dollars, and said he'd tip more if Soulja would delete a bunch of tweets. Soulja went on a deleting spree and the market went crazy.

14. The Market Consequences of Investment Advice on Reddit's Wallstreetbets: "We find average ‘buy’ recommendations result in two-day announcement returns of 1.1%.[...] 2% over the subsequent month and nearly 5% over the subsequent quarter. [...] our findings suggest that both WSB posters and users are skilled." Or as /r/wallstreetbets put it, "a group of scientists checked our sub out and came to the conclusion that we are not complete morons".

15. On Sarah Ruden's translation of the gospels: Do you know how weird the gospels are?

Plenty of good reviews came out of the SSC book review contest. My favorites:

16. Double Fold, on librarians and preservation.

17. On The Natural Faculties, a defense of Galen.

18. Down And Out In Paris And London, on Orwell's experiences as a tramp and menial worker.

20. From the great new blog SLIME MOLD TIME MOLD: Higher than the Shoulders of Giants; Or, a Scientist’s History of Drugs. What if the productivity growth slowdown is due to the 1970s Controlled Substances Act? Come for the history of stimulants, stay for Tesla's views on chewing gum. Too many good quotes! Not entirely sure if it's serious or tongue-in-cheek, but that's part of the charm.

21. Toby Ord: The Edges of Our Universe

22. Scott Alexander Contra Smith On Jewish Selective Immigration. The final paragraph is absolutely spot on: if the Ashkenazi advantage is cultural, then studying it is by far the most important question in the social sciences.

23. Shocks to human capital persist, shocks to physical capital do not: BOMBS, BRAINS, AND SCIENCE: THE ROLE OF HUMAN AND PHYSICAL CAPITAL FOR THE CREATION OF SCIENTIFIC KNOWLEDGE. Also interesting for the data on Jewish contributions to German science before the war: "While 15.0% of physicists were dismissed, they published 23.8% of top journal papers before 1933, and received 64% of the citations"! h/t @cicatriz

25. No causal associations between childhood family income and subsequent psychiatric disorders, substance misuse and violent crime arrests: a nationwide Finnish study of >650 000 individuals and their siblings. A new study from Amir Sariaslan and colleagues, corroborating earlier results from Sweden. Perhaps the Scandinavian nations with their generous social spending are different from countries with greater inequality though?

26. The Lead-Crime Hypothesis: A Meta-Analysis. "When we restrict our analysis to only high-quality studies that address endogeneity the estimated mean effect size is close to zero." That's quite the funnel plot: 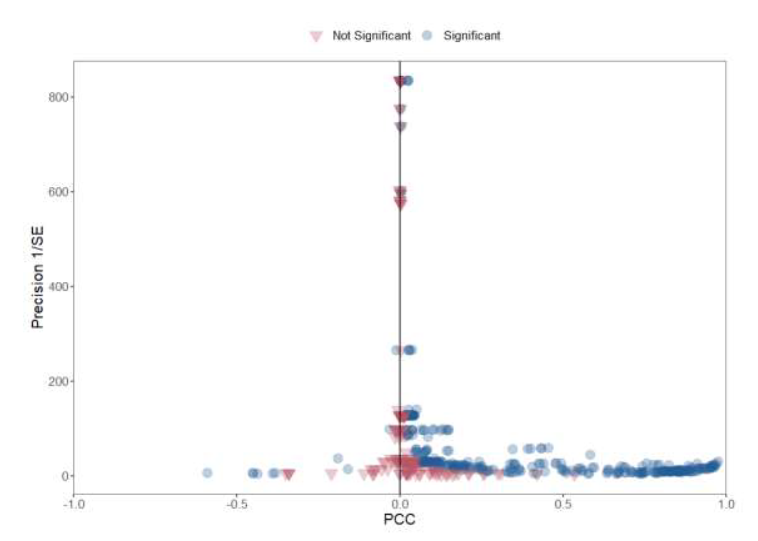 27. Better air is the easiest way not to die. On particles in the air, the harm they cause, and how to avoid them. "By all means, control your body-mass, eat well, and start running. Those are important, but they’re also kind of hard. You might fail to lose weight, but if you try to fix your air, you’ll succeed. You should put the stuff with the highest return on effort first, and that’s air."

By the end of the movie Mr. Fox has pillaged and salted three of the country's largest industrial farms and set a small town on fire with acorn bombs. He got symbolically castrated, lost his home, almost lost his marriage, children, and destroyed the homes and businesses of 20 people who were lucky they didn't starve to death—but he's gotten people to read his column.

29. In 1989 there was an ecoterrorist attack on California, using an invasive species of fruit fly.

30. Viral Visualizations: How Coronavirus Skeptics Use Orthodox Data Practices to Promote Unorthodox Science Online. A seemingly-Straussian (but possibly not) paper on the social epistemology of covid skepticism. "Most fundamentally, the groups we studied believe that science is a process, and not an institution. [...] Moreover, this is a subculture shaped by mistrust of established authorities and orthodox scientific viewpoints. Its members value individual initiative and ingenuity, trusting scientific analysis only insofar as they can replicate it themselves by accessing and manipulating the data firsthand."

31. Robin Hanson: Managed Competition or Competing Managers? On how attitudes toward competition influence our judgments about things like evolution and alien civilizations. "This strong norm favoring management over competition helps explain the widespread and continuing dislike for the theory of natural selection, which explicitly declares a system of competition to be the largest encompassing system."

32. The Deep History of Human Inequality. Rousseau, Darwin, and Boehm on the question of evolution and inequality. "Going further, it could be that culture was essential for reversing polygyny. That’s because practising reverse dominance requires collective action. It’s only by working together that bachelors can depose the big boys."

33. Applied Divinity Studies on Stubborn Attachments, longtermism, progress studies, and effective altruism: The Moral Foundations of Progress. "If we stagnate now, we may be able to restart growth in the future. In comparison, an existential catastrophe is by definition unrecoverable. Given the choice, we ought to focus on stability."

34. A new essay from Houellebecq: The narcissistic fall of France.

No, we are not really dealing with a “French suicide” — to evoke the title of Eric Zemmour’s book — but a Western suicide or rather a suicide of modernity, since Asian countries are not spared. What is specifically, authentically French is the awareness of this suicide. [...] By refusing all forms of immigration, Asian countries have opted for a simple suicide, without complications or disturbances. The countries of Southern Europe are in the same situation, although one wonders if they have consciously chosen it. Migrants do land in Italy, in Spain and in Greece — but they only pass through, without helping to sort out the demographic balance, although the women of these countries are often highly desirable. No, the migrants are drawn irresistibly to the biggest and fattest cheeses, the countries of Northern Europe.

35. The Borderless Welfare State, a report from the Netherlands on the costs and benefits of immigration. Summary in English on p. 19. Scroll down for some great charts.

37. What if humans and chimpanzees diverged because of ticks? Hair loss as defense against ticks caused babies to be unable to cling to their mothers, which caused upright walking?! Obviously speculative, but I love this kind of speculation.

38. Wikipedia: Meteor burst communications "is a radio propagation mode that exploits the ionized trails of meteors during atmospheric entry to establish brief communications paths between radio stations up to 2,250 kilometres (1,400 mi) apart."

39. Niccolo Soldo interviews Marc Andreessen(?!?!) "I predict that we — the West — are going to WEIRDify the entire world, within the next 50 years, the next two generations. We will do this not by converting non-WEIRD people to WEIRD, but by getting their kids." His interview with "Unrepentant Baguette Merchant" PEG is also entertaining.

40. Everyone with an e-reader has run into public domain ebooks with horrible formatting/OCR errors on Amazon or Project Gutenberg. Standard Ebooks produces high-quality (and free) versions of public domain books.

42. ETH token fights back against frontrunning bots by trapping them in the position.

43. How I Taught The Iliad to Chinese Teenagers

44. On the virtues of frozen food.

46. DeepMind's AlphaGo documentary is quite good.

48. And here's Viagra Boys with Girls & Boys from Shrimp Sessions 2.