1. Large Language Models are Zero-Shot Reasoners: "Simply adding “Let’s think step by step” before each answer increases the accuracy on MultiArith from 17.7% to 78.7% and GSM8K from 10.4% to 40.7% with GPT-3." Here's how different prompts compare: 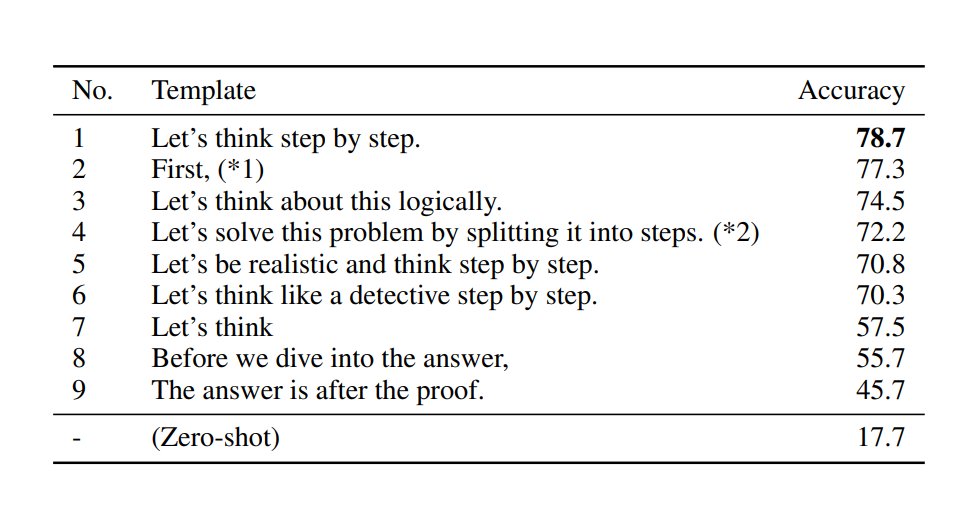 2. DALL·E 2 is pretty crazy. Tons of good threads on twitter featuring its work, here's one of my favorites.

A psychologist thrown back in time to 2012 is a one-eyed man in the kingdom of the blind, with no advantage, only cursed by the knowledge of the falsity of all the fads and fashions he is surrounded by; a DL researcher, on the other hand, is Prometheus bringing down fire.

4. Speaking of AI and Prometheus...

5. A model trained on /pol/ data successfully(?) sends out thousands of shitposts.

6. Yarvin contra AI x-risk fears. I am not convinced.

10. The New Science report on the NIH. Enormous but very much worth your time.

11. On that baby brainwave study and more general issues around that sort of research.

12. In the Guardian: The big idea: should we get rid of the scientific paper?

13. Ideological biases in research evaluations? The case of research on majority—minority relations

Within this field, social contact and conflict theories emphasize different aspects of majority—minority relations, where the former has a left-liberal leaning in its assumptions and implications. We randomized the conclusion of the research they evaluated so that the research supported one of the two perspectives. Although the research designs are the same, those receiving the social contact conclusion evaluate the quality and relevance of the design more favorably. We do not find similar differences in evaluations of a study on a nonpoliticized topic.

Note the effect is quite small though.

14. On the role of millet, rice, and timing of agriculture in Chinese state formation.

15. The SSC book review contest is pretty strong this year as well. My favorite thus far: The Dawn Of Everything

A “Gossip Trap” is when your whole world doesn’t exceed Dunbar’s number and to organize your society you are forced to discuss mostly people. It is Mean Girls (and mean boys), but forever. And yes, gossip can act as a leveling mechanism and social power has a bunch of positives—it’s the stuff of life, really. But it’s a terrible way to organize society. So perhaps we leveled ourselves into the ground for 90,000 years.

16. Judge Woolsey on Ulysses: ""[i]n respect of the recurrent emergence of the theme of sex in the minds of [Joyce's] characters, it must always be remembered that his locale was Celtic and his season Spring. [...] [W]hilst in many places the effect of Ulysses on the reader undoubtedly is somewhat emetic, nowhere does it tend to be an aphrodisiac."

19. Latest news from the Good, Actually dpt: incarceration cuts mortality by half.

20. Matt Lakeman continues his travel blogs, this time he reports from Ukraine.

21. What I learned gathering thousands of nootropic ratings.

22. Daniël Lakens has released a free ebook on improving your statistical inferences.

23. New evidence on the genetic history of Ashkenazi Jews: "our results suggest that the AJ founder event and the acquisition of the main sources of ancestry pre-dated the 14th century and highlight late medieval genetic heterogeneity no longer present in modern AJ."

24. Mechanical Watch (lots of crazy shit on this blog)

25. On foreign aid and ethnic conflict.

Academia is characterized by well-trodden problems, hashed over for decades, and negligible novel data for resolving them. Industry is by comparison a mass of green field areas of inquiry with large budgets, minimal bureaucracy, and ample data.