Arpit Gupta on prediction markets vs 538 in the 2020 election: "Betting markets are pretty well calibrated—state markets that have an estimate of 50% are, in fact, tossups in the election. 538 is at least 20 points off—if 538 says that a state has a ~74% chance of going for Democrats, it really is a tossup." Also, In Defense of Polling: How I earned $50,000 on election night using polling data and some Python code. Here is a giant spreadsheet that scores 538/Economist vs markets. And here is a literal banana arguing against the very idea of polls.

Markets vs. polls as election predictors: An historical assessment (2012). Election prediction markets stretch back to the 19th century, and they used to be heavily traded and remarkably accurate despite the lack of any systematic polling information. Once polling was invented, volumes dropped and prediction markets lost their edge. Perhaps things are swinging in the other direction again?

Metaculus is organizing a "large-scale, comprehensive forecasting tournament dedicated to predicting advances in artificial intelligence" with $50k in prize money.

However, as far as can tell, Flaxman et al. don’t say what the country-specific effect was for Sweden either in the paper or in the supplementary materials. This immediately triggered my bullshit detector, so I went and downloaded the code of their paper to take a closer look at the results and, lo and behold, my suspicion was confirmed. In this chart, I have plotted the country-specific effect of the last intervention in each country: 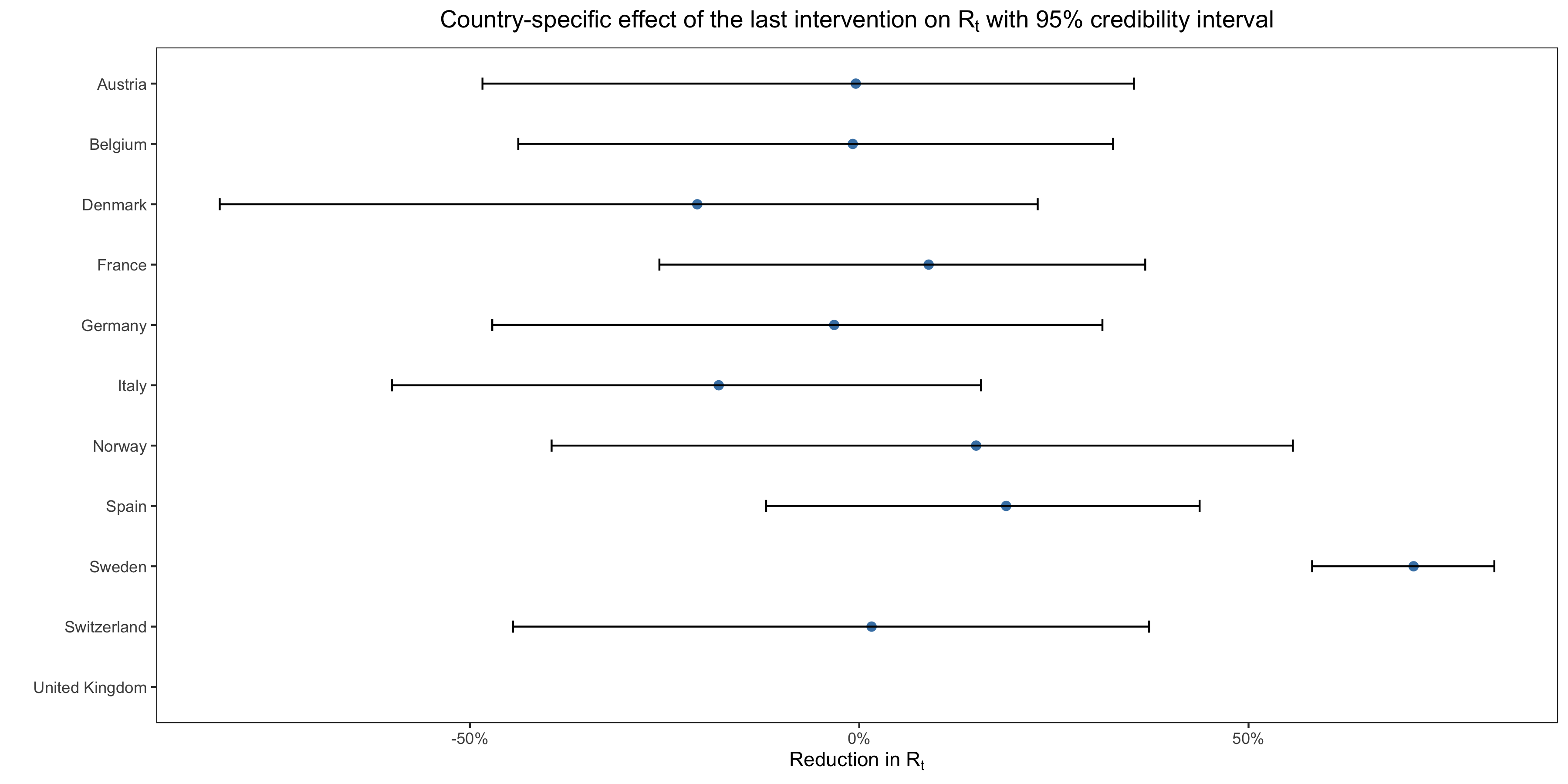 Alex Tabarrok has been beating the drum for delaying the second dose and vaccinating more people with a single dose instead.

Twitter thread on the new, potentially more infectious B.1.1.7 variant.

An ancient coronavirus-like epidemic drove adaptation in East Asians from 25,000 to 5,000 years ago. Plus Razib Khan commentary.

Scent dog identification of samples from COVID-19 patients: "The dogs were able to discriminate between samples of infected (positive) and non-infected (negative) individuals with average diagnostic sensitivity of 82.63% and specificity of 96.35%." [N=1012] Unfortunately they didn't try it on asymptomatic/pre-symptomatic cases.

And a massive update on everything Covid from Zvi Mowshowitz, much of it infuriating. Do approach with caution though, the auction argument in particular seems questionable.

Peer Rejection in Science: a collection of "key discoveries have been at some point rejected, mocked, or ignored by leading scientists and expert commissions."

Somewhat related: if GAI is close, why aren't large companies investing in it? NunoSempere comments with some interesting historical examples of breakthrough technologies that received very little investment or were believed to be impossible before they were realized.

Deepmind solves protein folding. And a couple of great blog posts by Mohammed AlQuraishi, where he talks about why AlphaFold is important, why this innovation didn't come from pharmaceutical companies or the academy, and more:

"These improvements drop the turn-around time from days to twelve hours and the cost for whole genome sequencing (WGS) from about $1000 to $15, as well as increase data production by several orders of magnitude." If this is real (and keep in mind $15 is not the actual price end-users would pay) we can expect universal whole-genome sequencing, vast improvements in PGSs, and pervasive usage of genetics in medicine in the near future.

Extrapolating GPT-N performance: "Close-to-optimal performance on these benchmarks seems like it’s at least ~3 orders of magnitude compute away [...] Taking into account both software improvements and potential bottlenecks like data, I’d be inclined to update that downwards, maybe an order of magnitude or so (for a total cost of ~$10-100B). Given hardware improvements in the next 5-10 years, I would expect that to fall further to ~$1-10B."

Fund people, not projects I: The HHMI and the NIH Director's Pioneer Award. "Ultimately it's hard to disagree with Azoulay & Li (2020), we need a better science of science! The scientific method needs to examine the social practice of science as well, and this should involve funders doing more experiments to see what works. Rather than doing whatever is it that they are doing now, funders should introduce an element of explicit randomization into their process."

It will take more than a few high-profile innovations to end the great stagnation. "And if you sincerely believe that we are in a new era of progress, then argue for it rigorously! Show it in the data. Revisit the papers that were so convincing to you a year ago, and go refute them directly."

Why Are Some Bilingual People Dyslexic in English but Not Their Other Language? I'm not entirely sure about the explanations proposed in the article, but it's fascinating nonetheless.

The Centre for Applied Eschatology: "CAE is an interdisciplinary research center dedicated to practical solutions for existential or global catastrophe. We partner with government, private enterprise, and academia to leverage knowledge, resources, and diverse interests in creative fusion to bring enduring and universal transformation. We unite our age’s greatest expertise to accomplish history’s greatest task."

Labor share has been decreasing over the past decades, but without a corresponding increase in the capital share of income. Where does the money go? This paper suggests: housing costs. Home ownership as investment may have seemed like a great idea in the past, but now we're stuck in this terrible equilibrium where spiraling housing costs are causing huge problems but it would be political suicide to do anything about it. It's easy to say "LVT now!" but good luck formulating a real plan to make it reality.

1/4 of animals used in research are included in published papers. Someone told me this figure is surprisingly high. Unfortunately there's no data in the paper breaking down unpublished null results vs bad data/failed experiments/etc.

@Evolving_Moloch reviews Rutger Bregman's Humankind. "Bregman presents hunter-gatherer societies as being inherently peaceful, antiwar, equal, and feminist likely because these are commonly expressed social values among educated people in his own society today. This is not history but mythology."

@ArtirKel reviews Vinay Prasad's Malignant, with some comments on progress in cancer therapy and the design of clinical trials. "The whole system is permeated by industry-money, with the concomitant perverse incentives that generates."

@Cerebralab2 reviews Nick Lane's Power, Sex, Suicide: Mitochondria and the meaning of life. "The eukaryotic cell appeared much later (according to the mainstream view) and in the space of just a few hundred million years—a fraction of the time available to bacteria—gave rise to the great fountain of life we see all around us."

Is the great filter behind us? The Timing of Evolutionary Transitions Suggests Intelligent Life Is Rare. "Together with the dispersed timing of key evolutionary transitions and plausible priors, one can conclude that the expected transition times likely exceed the lifetime of Earth, perhaps by many orders of magnitude. In turn, this suggests that intelligent life is likely to be exceptionally rare." (Highly speculative, and there are some assumptions one might reasonably disagree with.)

How to Talk When a Machine is Listening: Corporate Disclosure in the Age of AI. "Companies [...] manage the sentiment and tone of their disclosures to induce algorithmic readers to draw favorable conclusions about the content."

On the Lambda School stats. "If their outcomes are actually good, why do they have to constantly lie?"

On the rationalism-to-trad pipeline. (Does such a pipeline actually exist?) "That "choice" as a guiding principle is suspect in itself. It's downstream from hundreds of factors that have nothing to do with reason. Anything from a leg cramp to an insult at work can alter the "rational" substrate significantly. Building civilizations on the quicksand of human whim is hubris defined."

There is a wikipedia article titled List of nicknames used by Donald Trump.

Why Is There a Full-Scale Replica of the Parthenon in Nashville, Tennessee?

We Are What We Watch: Movie Plots Predict the Personalities of Those who “Like” Them. An amusing confirmation of stereotypes: low extraversion people are anime fanatics, low agreeableness people like Hannibal, and low openness people just have terrible taste (under a more benevolent regime they might perhaps be prohibited from consuming media). 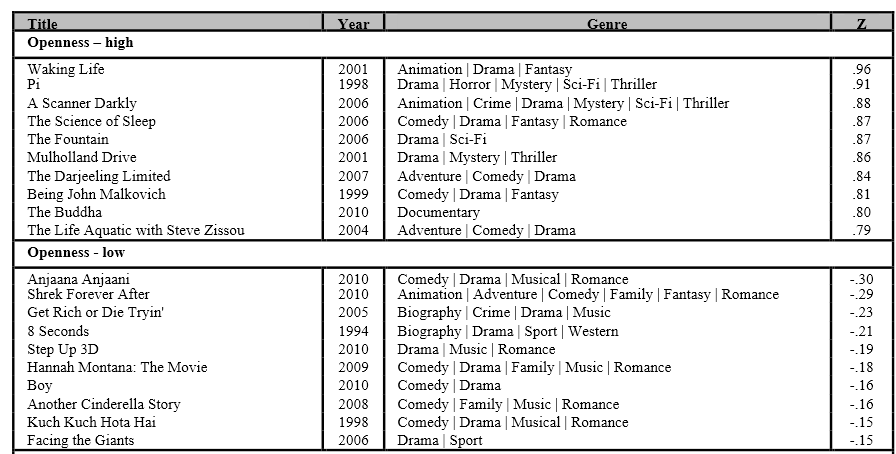 A short film based on Blindsight. Won't make any sense if you haven't read the book, but it looks great.